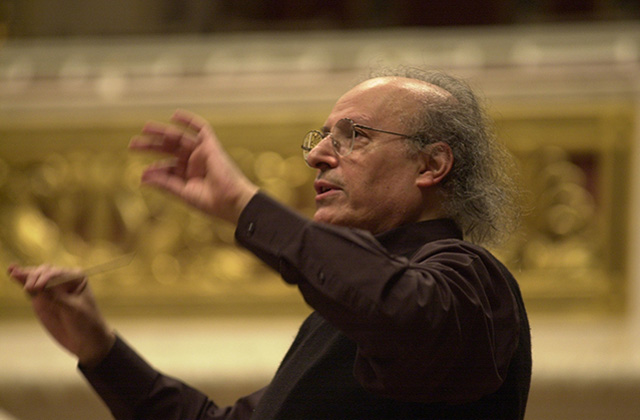 Since winning first prize in the Cantelli Conducting Competition at the age of 26, Eliahu Inbal has enjoyed an international career, conducting leading orchestras worldwide. Over the years, he has been appointed principal conductor of the Frankfurt Radio Symphony Orchestra (hr-Sinfonieorchester), Teatro La Fenice in Venice, RAI National Symphony Orchestra, Konzerthausorchester Berlin, Czech Philharmonic and the Tokyo Metropolitan Symphony Orchestra, who named him Conductor Laureate in 2014.

During his tenure with the hr-Sinfonieorchester (1974-1990), whose honorary conductor he remains today, Eliahu Inbal distinguished himself as an outstanding musical personality of our time. The charismatic Israeli conductor, who lives in Berlin, received international acclaim for his interpretations of Mahler and Bruckner on a number of award-winning recordings (Deutscher Schallplattenpreis, Grand Prix du Disque) and was the first to record the original versions of Bruckner’s symphonies. He has received special recognition for his interpretations of Dmitri Shostakovich’s symphonies in particular.

2016 marked Eliahu Inbal’s 80th birthday. Throughout the year, he featured as a guest conductor with the Stuttgart Radio Symphony Orchestra (SWR) in Basel, Vienna and at the Spring Festival in Monte-Carlo, conducted Bruckner’s Symphony No. 9 with the Orchestre Philharmonique de Radio France at the Philharmonie de Paris, Symphony No. 4 at the Konzerthaus Berlin and the Alte Oper Frankfurt, and Symphony No. 8 with the Orchestra del Teatro la Fenice. In 2017, a performance of Bruckner’s Eighth followed at the Philharmonie de Paris as well as Mahler’s Eighth at the Elbphilharmonie Hamburg shortly after its opening, in addition to a tour to Seoul and Japan with the Konzerthausorchester Berlin. In spring 2018 he will return to Asia for two months, on the invitation of orchestras including the China Philharmonic, Tokyo Metropolitan Symphony and the Singapore Symphony.

His operatic engagements have taken him to opera houses in Paris, Glyndebourne, Munich, Stuttgart, Zurich and Madrid, among others. He celebrated the 2013 Wagner anniversary year with highly acclaimed performances of Tristan and Isolde at the Festival de Opera de A Coruña and Parsifal at the Vlaamse Opera (International Opera Award 2014). Eliahu Inbal has been awarded the national Italian critic’s prize Abbiati et Viotti for his exceptional interpretations of Wagner’s Ring with the RAI National Symphony Orchestra.

Born in Israel, Eliahu Inbal studied violin and composition at the Jerusalem Music Academy before completing his studies at the Conservatoire National Supérieur in Paris on the recommendation of Leonard Bernstein. His teachers there included Louis Fourestier, Olivier Messiaen and Nadia Boulanger. He was also greatly influenced by Franco Ferrara in Hilversum (Netherlands) and Sergiu Celibidache in Siena (Italy). In 1990, the French government named Eliahu Inbal an officer of the Order of Arts and Letters. In February 2001 he was awarded the Golden Medal for Merit from the city of Vienna. He received the Goethe Badge of Honour from the City of Frankfurt and the Order of Merit from the Federal Republic of Germany in 2006.

``In Inbal, one can trace the clear traits of role models and teachers such as Franco Ferrara and Sergiu Celibidache; he possesses the strength for tranquillity and the sense to create unbridled passion and dramatic effect.``
Die Welt